Below are links to US Government branches, departments, agencies, as pseudo agencies supporting or watchdogging the US Federal Government.

Official US website
Find many agency links
The US Executive Branch

The White House
The elected President, Joseph "Joe" R Biden, presides over all the nation's federal agencies. (Discussed below) He serves for a 4-year term and was elected in Nov 2020 and he began service at his inauguration on January 20th 2021.   Biden's vice president, who presides over the Senate and would replace in case of his incapacitation or resignation, is Kamala Harris, former Democratic House member from California, and former attorney general there.. Presidential Order of Succession just in case he is convicted and removed, or resigns from office.-- Fm NY Daily News 2/2017
The President of the United States
President Biden was vice president under former President Barrack Obama for eight years beginning in 2008. Before that, Biden was a Senator from Delaware.   He is up for re-election in Nov, 2024.   Biden defeated former president Donald J Trump, a controversial New York real estate mogel who served one term.   Trump, who ran as a Republican, was impeached twice by the US House for high crimes and misdemeanors but was not removed by the US Senate which was composed of a narrow Republican majority.
The US Legislative Branch 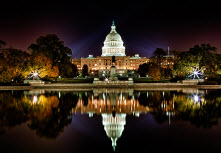 After the 2020 elections, the Democratic party held slight majorities in both the US House and the Senate after defeating the Republicans who held the Senate under Senate Republican Majority Leader Mitch McConnell (R-KY) who is now reduced in power to 'Minority Leader."   Rep.  Nancy Pelosi, (D-CA) has been Speaker of the House as majority leader there, and now Sen. Charles "Chuck" Schumer (D-NY)- took control of the Senate as Senate Majority leader.

The Senate Majority Leader is a powerful position in Congress because the Senate confirms judges and presidential appointments and the Senate leader controls debates and other key appointments.

US Federal Courts
The highest court is the Supreme Court of 9 justices appointed by the president and confirmed for life by the US Senate. Under it are federal courts in districts around the nation.   After the death of two Supreme court justices, and President Trump's appointments which were quickly approved by his Republican Senate, the voting power of the court favors Republican appointments but the Court Justices don't always vote in cases favoring Conservatives.   That is generally the intent of the President and Senate in selecting them,  however.

Federal Agencies
Federal Agencies generally fall under the Executive branch, led by the President .Other departments whose appointed heads are members of the President's Cabinet is a larger list.  They include the Department of Health and Human Services, Departments of Labor, Veterans Affairs, the Post Office, Department of Energy, Interior overseeing parks and federal lands, Treasury governing the American money supply, and Transportation overseeing highways, aviation, shipping, and more.  Below are some key departments many Americans are familiar with:

The State Department
US Embassies, consulates, outposts,  Overseas Travel information,  Ambassadors and diplomatic staff.
The Secretary of State oversees the Embassies around the world and often personally conducts the highest level negotiations on behalf of the President with similar level leaders around the world.  He or she works for peace among nations and conducts both political and economic relationships.  Consider the Secretary of State as the US personal emissary in foreign relationships.
Most Americans contact the State Department for Passports to other nations and when traveling, to Embassies and Consulates.

Library of Congress.
US Census Bureau
Bureau counts the population and collects data for public use every decade. This site shares certain public data by state and city, by gender, age and racial demographics.

What's the difference between
Republicans & Democrats?
Leaving site to:
https://www.worldatlas.com/articles/what-is-the-difference-between-republicans-and-democrats.html

Suburban Population Statistics
(by States and Cities;
not a Census bureau site)

If It Were My Home
(country comparisons)

Infoplease
Government, US and World History

Wikipedia in Simple English
123,000 articles Perfect for those whose
language isn't primarily English
Wiki:  Government of the US

YouTube One Hour film
Hubris:
How we got into Iraq...
"Why We Did it"
by Rachel Maddow, PhD, MSNBC