When you call 9-1-1
Click to see what happens, what they'll do
 BestLINKS US: Police and Justice links and abuse 
Why you shouldn't sick police on your kid
First, legal bills are expensive; second, you can't predict what violence the government will inflict on your kid if he/she resists!

Experts say kids don't get adult sense until almost age 29.  So if they get in trouble, who do they have to depend on to look out for them when the government gets pushy?   It's YOU.
When never to call the cops--and WHY!
https://www.huffpost.com/entry/police-violence-alternatives_n_5f2316d9c5b68fbfc8808bd9?tae&ncid=newsltushpmgspecial
Me, I never call the police except to pick up a DEAD BODY. Never call the cops on your troubled children because Police only make matters WORSE.  Kids need HELP not police with guns and jail keys!  Those are the only toos they  have, and most don't want to be counselors.  "Defund the Police only means fund mental health help too!!
Should I call the police on a person in Mental Health Crisis?
(by Huffington Post)
Surviving a Police stop
Tips and videos on your rights and how to minimize confrontations when they won't.

And they say he's not a "fascist?"
Is Trump helping or hurting police-citizen relations?

About RESISTING....when police inflict pain on you!

When people 'resist'... are they really resisting a legal 'arrest' or resisting further pain?   Did they TELL you you were under arrest?    You can't "resist arrest" until they tell you you're arrested!

Most cops don't deliberately confuse actual events by claiming you're attacking them so they can beat on you.   This is a real dilemma when dealing with rogue cops, though.   Best thing you can do is talk gently to them, assure them over and over, you're cooperating and let your actions show them.

Do aggressive police care when they hurt you?? Or are they using rough treatment on purpose, as their own "street justice"?

These bullies are why most people hate cops! Sadly, police don't usually police each OTHER--so they're also guilty of abuse!  And prosecutors rarely prosecute the very cops they depend on to help them win their court cases!    (This is why the FEDS should investigate police abuse, not county prosecutors who look the other way!   That won't work til Trump's outta here, which is why most police support  him.)

And Justice For All
Justice equality - police abuse

The Hill - article
Disturbing analysis of Police on Facebook 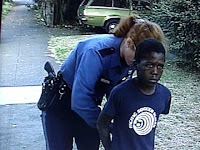 "The Talk."
Young black kids all get the talk
from parents about the police. 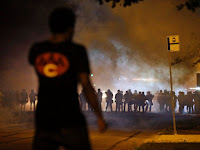 The Ferguson Mo killing
of a black teen.
This study is worthy to read it because it was controversial and upset a lot of people.  This is a case why the cop didn't get charged with murder... and that upset a lot of people in America, some of whom took to the streets, and caused the coining of the phrase "Black Lives Matter."   Read it.
NY Times 2017:  Big city police killings nothing new
Complaints high, punishment low


Back to Best Links