BestLINKS US: Surviving a police stop: Links and tips on your civil rights Police aren't pulling you over to HELP YOU or BE YOUR FRIEND. They troll the streets looking for lawbreakers to take to jail-- especially when they're bored. Don't fall for their slick tricks

Surviving a Police Stop
This is a 45 minute video but worth your time to watch before you get stopped!

"Do you know why I stopped you?"

Cops often ask this innocent-sounding but legally hazardous question. (Do not admit guilt. Make him tell you why he stopped you.)

"I want to remain silent until I have a lawyer."
That should end his questions to TRICK YOU to into a jail cell. You are not obligated to answer any of them but your name.

"I do not consent to a search."
The courts have said failure to consent is NOT probable cause to let him search without a warrant.   If he baits you by asking "what you're hiding?"  politely remind the officer that YOU know your rights and so should HE--so drop it.

Tell him nicely. "I know you're just doing your job, but I don't consent to searches without a warrant"-- unneeded if you foolishly left evidence out in plain sight!  (Fourth Amendment)

Note: in NO case should you physically STOP the policeman if he touches you or your property.  Or if he turns you, moves you to the curb, sits you down, or stands you up.  Never TOUCH him or threaten him because he'll charge you with assault and even use your touch as an excuse to apply excessive force on you!  Settle his excesses in court-- though remember courts tend to believe the officers, not you, unless you have conclusive videotape.   The legal system tends even to ignore witnesses supporting your story.

There are good cops and bully cops. The good ones will be impatiently patient! When their authority is threatened, the bully cops will call for backup and beat you or worse before backups arrive to stop them.  Some will even lie loudly into their microphones falsely saying, "Stop resisting"-- when you're not resisting at all.  They're faking evidence into their tape recorder, not talking to you at all!

"Are you arresting me, or am I free to go?"
This should end the game he's playing with you, which should tell him you' re not playing!   Moreover, once they realize you're not letting them bully you or cause you to lose your head, they'll let you go-- unless they have the evidence already.

Police Searches
Legal Video: When can police search you, your house, your car

Without your consent, police need "Probable Cause".  What is it??

When you're in your home

Advice from NORML lawyers:   Don't let them in to gather evidence.  Don't try to talk your way out of trouble at home.  Keep your mouth shut.. don't answer the door.   Don't let him see you through the window.  Be silent!

If they know you're inside and talk to you through the closed door, say NO if they ask you to let them come inside.  Instead, ask them to come back later when they have a warrant. Be polite but don't invite them in without one.

That works when they ask you to let them search your car, too.  Say no. Simply say "I know you're trying to do your job but I never consent to searches without a warrant, and that's my right.    Never lose rational control of yourself by losing it. 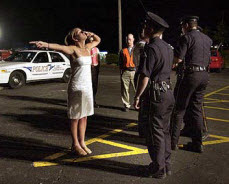 The most common and DECEPTIVE reason police use to tag you for drinking while driving:

"I stopped you because you were driving left of center.  Please step out of the car and walk a straight line."

You must obey his lawful orders to test your sobriety-- whether you think he's being truthful or not.  Now, if you know you have not been drinking or drugging, you can say "I'm steady driving but not walking...so I don't want to take your balance test.  Instead, I will consent to a blood or breathalyzer test which will clear this up."

It's OK to refuse walking an imaginary roadway line and other subjective physical tests... but refusing to blow into a breath-analyzer may cost you an automatic suspension of your license in many states.

Remember, always be polite; don't argue; obey if he gives you a lawful order.  Be a smartass and giving him crap will mean he'll give it back to teach you respect!  Moreover, their culture tells them not to tolerate you questioning their authority and they will use more and more force to win that control over you.

Protecting the cop and yourself

When sitting in or exiting your car, keep your hands in plain sight--like on the steering wheel; don't reach for anything without his specific permission--lest he worry you might be reaching for a weapon. You might find time after getting out of the car to say:

" You did have your DASHCAM ON when you were behind me, didn't you? I'm going to plead 'not guilty' and subpoena your dash cam. Then, my lawyer can SEE your 'probable cause' evidence on tape.

Don't play into their hands as they try over and over to gather evidence voluntarily from you! Just repeat, "NO, I want a lawyer." BE FIRM, but POLITE!

Click for Video:
Chris Rock's advice to the brothers on how not to get your ass beat by the po po.


Rights with Police
Articles on police searches, filming police,  or blinking your headlights to warn other drivers about a radar trap.

Back 1 to Police Justice
Back to BEST LINKS