US Chamber of Commerce

Retailing -  Where are the Jobs Going?

The mom and pop stores of the last century are disappearing fast with inventions of the giant Superstores, mail-order online stores and more.

Most started small, like Sam Walton's first store in Bentonville, Arkansas. They grew successfully, changing the face of retailing.

Big companies with thousands of stores like Walmart are owned by his mega-wealthy children. They can afford to charge less than other small stores by 'volume'---selling many goods cheaper by the thousands, rather than small storekeepers ordering manually and selling just a few.


The computer and optical bar-coding has changed how goods get to market. It made buying and selling more efficient and reduced costs. Hence bigger companies could sell products in their mega-stores or online for much less--which has priced small retailers out of the marketplace.

Computer business is called EDI Electronic Data Interchange--(the nerdy details).  It's an agreed upon system to automate much of our economy and reduce the need for millions of workers. 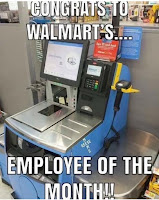 Big chain retailers like Walmart, Sears, and most others would require product manufacturers to create very specific PALLET code stickers to track what's on the pallets and inside Package codes, for trucking, distribution and UPC's "Universal Product codes" printed on the individual items to be sold"

No need for stock boys to manually put a price sticker on products or cashiers to push register buttons to charge customers the right amount.  Today, big retailers, even grocery stores are cutting even more staff by having customers scan their own under supervision of a watchful eye or camera to prevent theft. 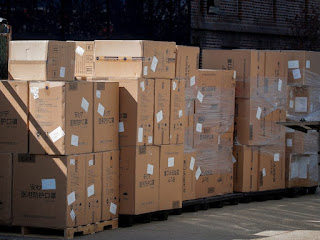 The plan was to electronically accept shipping boxes on the conveyor belts right out of the back of the semis, sort em, store em, and redistribute em to their retail outlets shelves--and then out the door in shopping cart you push to your car in the parking lot.. This is what's spelling the end for retail store emplolyees since they'll need MILLIONS fewer low paid clerks and cashiers.

Since the late 1980s, it's been a major improvement in efficiency to conduct how goods are made, moved, and sold-- pricing, ordering, and inventory control all over the world with very few unskilled workers. Workers are expensive.  Some steal,  some call in sick often, and all need expensive health insurance.

Computer programmers for a Chinese importers create the stickers and box/pallet signage to ship their products, automating warehousing and distribution. That eliminated many human hands along the chain from manufacturers to stores.   This automation made products at the store cost less because it was so efficient-- and without humans needing sick time, health insurance, and training.

Foreign workers make this cheaper and that's why so much is made overseas.  Americans buy by price and US corporations are all about profits and high volume selling.

Billions of dollars of goods you buy aren't made in the US anymore, even with the names of famous American brands.  Many American corporations have shut down their plants here and build their goods in places like China, Taiwan and others.  That means most goods in American stores started out on ships from Asia.   And the shipping containers that are unloaded in California ports are moved by rail or truck to stores all over America. 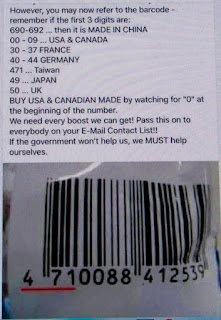 Here's a list of the Country product code Prefixes on things you buy to tell you where they're made, whether in the US or other nations.  The first three letters tell you the country of origination.  To see ALL the countries, click here.

How that affects you, your kids, your parents

The big secret is that computer programmers put retail, manufacturing and distribution people out of work. Who will be left but delivery drivers and programmers?

Explain that to your kids when they decide to play instead of learn job skills to earn them enough money to feed their families for fifty years. Yup, its very hard to second guess progress.

That should put an end to the 1950s notion that you're 'educated' with a high school diploma. It just ain't so, unless you want to be poor!

Cold Truth.  How your kids apply themselves between middle school and age 25 will mean a MILLION DOLLAR difference in their lifetime income! Too bad that's also the time of their lives where they're not so smart but also preoccupied with puberty.

Will they make their livings with their BRAINS, or their BACKS? Or put another way, there aren't many jobs requiring video gaming skills!

How to Choose a
Financial Advisor - Forbes